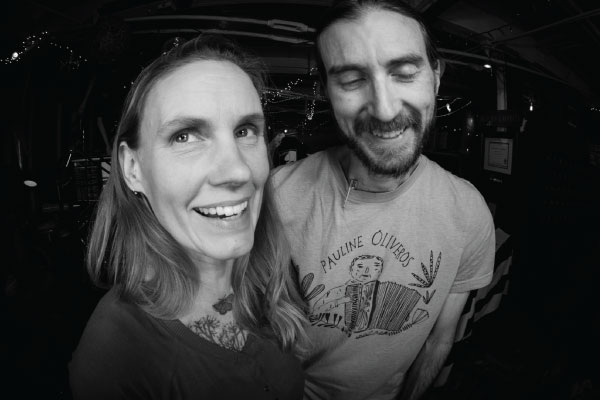 Ariel Zevon is a singer songwriter based in Vermont who recently appeared on the podcast Rocket Shop Radio Hour, which features Vermont music and artists.

When I first walked into Rocketshop the night of Ariel Zevon and Gahlord Dwald’s duo performance, the first thing I heard was a sound check. Emanating from one of the speakers was a low,ominous, bass heavy sound, and my first reaction was, “Damn, that sounds like a UFO.” When incorporated into the beat, Gahlord produced this ethereal, cosmic sound that I can best describe as the musical equivalent to stargazing. It was like someone applied a tune and vocals to the deep, ominous white noise one would imagine space having.

Little did I know at the time, but I was listening to “Digitize My Heart,” by Ariel Zevon, straight off her album The Detangler. While Gahlord prides himself as a well-versed bass-man and improvisationalist, Ariel takes charge of songwriting in their combined efforts. Standalone, Ariel and Gahlord took separate paths to end up on the same stage.

Ariel was brought into music as an actor, initially avoiding music for years, simply viewing it as a writing form that she was both incapable of and not interested in. This changed with the Occupy Wall Street Movement, more specifically with the fact that her mother was an avid activist for it, being there on the street as it happened. With the push and mindset of “gotta contribute something,” Ariel began to pen parody songs for the movement to help spread their message. It was this that finally lit the spark and fanned the flame for Ariel’s songwriting career.

The other fifty percent of the duo, Gahlord Dwald, is best known for his improv, which took me by honest to god surprise. There’s people who improvise speeches, presentations, all the sort, but then there’s Gahlord, who improvises his entire bass part as the song plays. For him, the music is all about the sensations behind the sounds themselves, particularly how they feel, and furthermore: what they make the listener feel. It’s for this exact reason he enjoys playing alongside Ariel. In his own words, he feels that with Ariel’s songwriting he gets to “dance around the beat more,” and that “it’s hard to find other musicians willing to hang on for the ride.” Which, if anything, is an accurate assessment of what their music feels like.

Next up was the appropriately titled “The French Song.” The entire song is done in french, something only possible thanks to Ariel’s bilingual abilities. She says that it “brings up a different flavor” in the music, something anyone who has ever heard spoken French (or even the song in question for that matter) can agree on. It just sounds more musical than English, something “The French Song” nails home with it’s more soothing tone and verses. It was here that I also first noticed how well Gahlord’s base blends into the song, kind of floating in and out of the background, adding this deepening, earthy feeling that layered the sounds beautifully.

As far as them as a duo goes, the two knew each other in passing during time spent at Marlboro College, but only as far as “Yeah, I know of that person, but I don’t really know that person.” Years afterwards, through the combined might of social media and fellow musicians, the two in essence “rediscovered” each other and, most importantly, their shared passions. Both draw influence and aspiration from the avant garde, and both value the general nature of experimenting with the music to create something both of quality and wholly unique.

But uniqueness isn’t always something completely out of the blue and unexpected, like “The French Song.” Sometimes their uniqueness takes the form of “Fickle-Heart,” another song written by Ariel, straight off “The Detangler” album. This was much more of a folky, guitar-based melody with a sporadic and rapid energy to its chorus, trading highs and lows back and forth to create a terribly well paced song that had me—a person who doesn’t listen to this genre—grooving around in my seat. But most importantly, the bass here excelled and proved its purpose in these songs. Although Gahlord plays from mind more than paper, it was clear that he knew the song and its various ins and outs like the back of his own palm. The bass enhanced the background sound, making the music itself feel thicker, and added this gravity behind it that really brought it home.

The same stands true for what came as their final song of the night: “Black Oil.” Here, the songwriting by Ariel truly came alive with a haunting set of main vocals and verses. As one may assume from the name alone, the song relates to the poisoned environment, painting pictures of perishing plant-life and poisoned humans. When I say “haunting,” mind you, I’m speaking to a certain spine-tingling nature they have; how although the song plays soft and smoothly, the lyrics carry an eerie breeze with them, an element only accentuated by the low bass that looms in the background.

Although their setlist tonight at Big Heavy World primarily comes from Ariel’s album “The Detangler,” one shouldn’t only look there for their works. In addition to Ariel’s first album “The Marshlands,” the two have been performing live and experimenting in their genres consistently since. Currently, Ariel has confirmed that Gahlord has/is contributing pieces for a new album by her, and that talks are currently happening on the idea of a duo-album. Until that time comes, they can be found performing around Vermont, continuing to experiment with their music and letting others feel it.