I am a Vermont Artist: Alexa Rivera 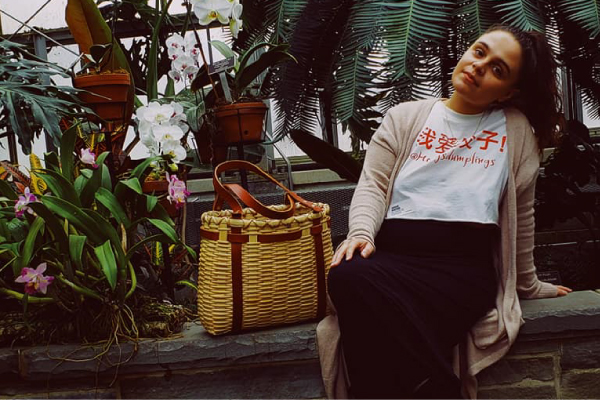 To hold something is harder than you might think. It takes preparation, motivation, ancient skill and technique. All through history, there have been people for whom holding is a calling: the weavers.

Alexa Rivera of Burlington has been weaving since she was 10. It started with needle and thread bead weaving in Poughkeepsie, NY, where she would help the older women in her classes thread their needles. After moving to Vermont in 2012, Alexa often found herself weaving with natural materials found in the woods. This habit grew into a vocation and a business, WOVN.COUNTRY, through which Alexa has been selling fine baskets and teaching the art and craft of basket weaving since 2016.

Like so many Vermonters, Alexa is down to earth about her work. There was a time when she hesitated to think of her baskets as art—she makes them because they are useful, because they hold things people need. But Alexa has found that her weaving is more than the sum of its parts. It is a way to engage the human spirit, and to strengthen our connections to the land and to our ancestors.

Alexa shared her thoughts on being a Vermont artist.

There is something about the smallness of Vermont that makes things possible. One summer I decided I wanted to be a beekeeper, and one Craigslist search and a few emails later and I was spending my days surrounded by swarms of bees, working for one of the largest commercial beekeeping operations in the state, swollen with venom and sticky with honey, driving all around the Champlain Islands and Northeast Kingdom to check on colonies and queens.

Coming from a much bigger place (I grew up in Poughkeepsie, NY, and had family all throughout New York City), it just didn’t seem as possible that you could want to do something or be something, and then go do it. Vermont is small, and the community is wildly and overwhelmingly supportive, and my creative process has expanded from the weightlessness of possibility. This place is beautiful, and people are all over the state looking at those mountains and streams and deciding that they can do interesting things and live good lives. It just makes you wanna do it too.

Something that has changed about my art over time is actually allowing myself to view what I do as “art” at all. For a while, I was very quick to make the distinction that what I was doing was a craft—done across the globe since forever, one that I had no claim to have invented, and that was about usefulness and practicality. “Art” to me was big and important, and the artists that I looked up to were making things that were about love and death and existence and trauma and joy and life’s great questions, and I just wanted to make things that held other things.

What has changed is that now I know just making things to hold other things is also about love and death and existence and trauma and joy and life’s great questions. And the days it’s not about that at all, the days it’s just about the rhythm of under over, under over, whew—those are the best days.

In the next few years, I’d like to explore place and identity through my basketry. For years I have woven other peoples’ baskets, such as Adirondack pack baskets and Appalachian egg baskets, and learned their histories. But now I want, and need, to weave the baskets of my own people. Puerto Rico, where my father’s side is from, has a palm weaving tradition, as well as the fascinating basketry tradition of the Taíno—the indigenous people of the islands.

One of my projects in dreaming phase right now is to explore those traditional Caribbean techniques, but to weave them with plants native to Vermont—and then to weave the classic styles of baskets of the Northeast, but substituting the materials for tropical grasses and vines. I see it as a nod to and a study of people and place, and our blood home and our choice home, and the idea of being “half of,” which I think many people, particularly mixed race people, struggle with. I also just wanna make pretty things and drink whiskey and try to fight for justice and have fun, you know?

Read this recent interview with Alexa.

The “I am a Vermont Artist” series explores how artists’ creative expressions reflect their experiences of ethnicity, gender identity, religion, disability, or age. Covering all artistic disciplines, and a range of backgrounds—from New Americans to the state’s first residents—we hope to amplify voices that deepen our understanding of what it means to be a Vermont artist. This story by the Vermont Arts Council originally appeared at https://www.vermontartscouncil.org/blog/i-am-a-vermont-artist-alexa-rivera/