A Tale of Two Luthiers 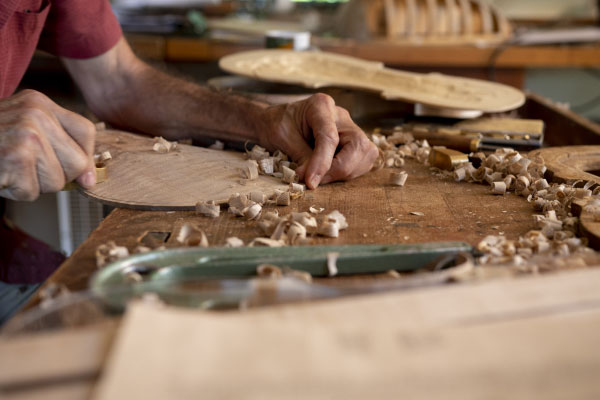 In the hip city of Burlington, Creston Lea builds one of a kind electric guitars, while in southern Vermont, Douglas Cox turns out violins for classical musicians around the world.

Creston Lea and Douglas Cox live about as far apart as two Vermonters can get, but are connected by their craft as luthiers. As summer concerts fill stages and meadows across the country, handmade instruments built by these two luthiers using Vermont maple, spruce, butternut, and even reclaimed wood salvaged from old barns will be played by musicians ranging from Vermont Symphony Orchestra music director, Jamie Laredo, to former Oasis lead guitarist, Noel Gallager.

When Creston Lea began making electric guitars more than a decade ago, he was clear about one thing. He did not want to make a guitar that someone could get anywhere else. His approach was to use familiar shapes and put together unusual or unorthodox variations. For example, he might use pickups associated with a Gibson, and put it into a Fender style body. “It was considered a revolutionary act,” said Lea. “It distinguished me from all the people making exact replicas of vintage instruments.” He would finish the guitars in different colors and patterns– a “fruit salad of guitar making.” His unique styles began to attract a certain type of musician, mainly in the alternative rock and country genres, and eventually players who had seen his guitars on stage began to seek him out.

Even as demand grew, Lea kept to the idea that each guitar should be unique to the player for whom it was made.  “It’s hard to find a guitar that fits you ergonomically, aesthetically, and sonically,” he said. “That’s where custom guitars come in, so why recreate something that already exists?” His second abiding principle is that he wants to be excited about every guitar he builds. “Every guitar I make should look good, sound good, and feel good,” he said. Guitars featured on his website range in color from “old spruce” to “surf green” and include a collection of guitars designed in collaboration with artist Sarah Ryan from Colchester, Vermont. Today, Lea makes 50 to 60 custom guitars per year.

Lea’s guitars are made with a variety of woods, including salvaged wood from old barns around Vermont. “At first it was a bit of a novelty. I liked the age and patina of the wood and thought it would look cool, but it turned out that it also sounded pretty good,” said Lea. He estimates that about one-third of his guitars are made with reclaimed wood. The other two-thirds are made with a variety of species, including maple, butternut, sugar pine, alder, ash, and old growth adirondack spruce. “I think most woods are worth trying,” he said.

In the early years, Vermont provided Lea with the isolation he needed to create without constant feedback or input from a discriminating industry. He spent time with Paul Langueduc, the sound engineer for Phish and the maker of Trey Anastasio’s guitars, but mostly enjoyed having space to test his radical ideas in solitude. As his guitars were discovered by players around the country, being from Vermont became part of his brand. “Made in Vermont has cache,” he said. “There is a romantic idea of what happens here and building instruments fits that ideal.”

About 150 miles south, Douglas Cox agrees. Located in West Brattleboro, Cox has been building violins for more than 35 years. “There is a vibrant classical music scene here. People in the violin world know the Marlboro Music Festival and Yellow Barn in Putney.” However it wasn’t music festivals, or the many up and coming musicians traveling through the area that attracted Cox to the area. It was the forest.

Cox learned the art of violin making in a Bavarian alpine community in southern Germany, where he hiked into the woods to source wood for his violins. “I wanted to recreate that sense of place and be able to use local wood,” he said.

Known to grab promising pieces from stacks of firewood, Cox introduced himself to the mill owners at Cersosimo and Allard Lumber, both in Brattleboro, and asked permission to sort through their log piles. “At first they weren’t sure,” he said, “but I offered to pay double the mill value and soon enough, they were putting pieces aside for me. It’s a nice relationship.”

With raw materials in hand, Cox begins the laborious and highly skilled process of building his violins, a process detailed through a collaboration with the Vermont Symphony Orchestra called VSO Violin: From Forest to Stage. “For many people, the instruments on stage are a mystery,” explained VSO Executive Director Benjamin Cadwallader. “Yet working with wood and assembling pieces are familiar to nearly everyone. By seeing and touching each part, people were able to connect with the process, the instrument, and the music.”

While the wood species used in violin making do not typically vary, the density of the wood, how much material is in each cubic centimeter, and the “spring” of the wood all impact sound. “Shape and style can be adjusted to change the tone,” said Cox, “you have to work with the qualities of the wood. There are no scientific measurements, so much of making a violin relies on instinct and experience.”

The VSO violin was completed in 2017 and will be taking the stage this summer. “Every violin I make will last about 300 years,” said Cox. “When it leaves my shop, it’s only half done. The VSO violin is just beginning it’s journey.”

In addition to the Vermont Symphony Orchestra, Cox’s violins are being played by professionals in Australia, Botswana, Singapore, Turkey, Brazil, and England. “These instruments are not a local novelty,” he said. “They are being played around the world.” When we spoke in June, Cox was working on his 983rd instrument. “Each one is individual,” he said. “I know exactly how many I have made.”

Handcrafted instruments made in Vermont go well beyond Lea’s electric guitars and Cox’s violins. The Green Mountain State is home to makers of ukuleles, harpsichords, drums, cellos, and flutes. The hills are indeed alive with the sound of music, and with the industrious sound of wood being cut, shaped, sanded, and finished into the instruments that make that music.

It’s an incredible privilege,” said Cox, “to take a piece of firewood and make something worth more than its weight in gold.”

This story by the Vermont Sustainable Jobs Fund originally appeared at https://www.vsjf.org/2018/07/26/a-tale-of-two-luthiers/. Photos by Erica Houskeeper. Written by Christine McGowan.