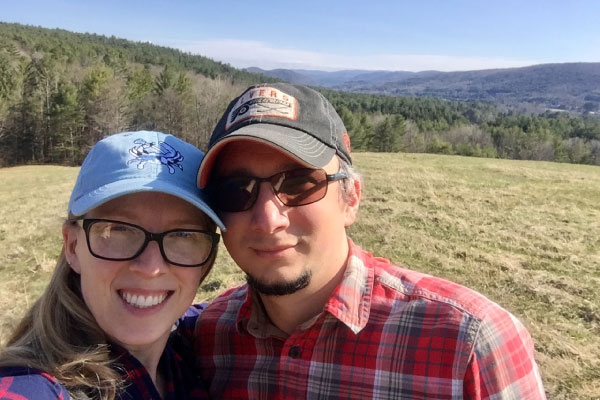 For Emily Lewis, 36, and her husband, Todd, 37, life in Vermont is all about the outdoors and forging community connections, and that’s just the way they like it.

Lewis had turned the idea of moving to Vermont over in her mind for almost a decade after spending time in Burlington, and after a 2019 trip to Vermont’s Northeast Kingdom, the couple realized it was time to leave Baltimore, Maryland for greener mountains.

The couple relocated to Randolph, Vermont in January 2020. They say throughout the COVID-19 pandemic, Vermont’s small communities and outdoor opportunities have anchored them to their new home.

“It’s been very difficult adjusting to life in a new place during a pandemic, but I’m grateful for an abundance of small towns to explore and easy access to nature. I’m able to snowshoe right outside my door and cross the street to get to a trail system for hiking and running. We joined the 251 Club to motivate ourselves to visit every city and town in Vermont,” Lewis said.

Before they were able to commit to the move, the Lewises spent about six months looking for jobs. Emily works as a landscape architect, and “my field of landscape architecture is very small and specialized which adds to the difficulty [of finding employment].”

After several months of searching without success, “I decided to spend a month working on a farm in the Northeast Kingdom through WWOOF (Worldwide Opportunities on Organic Farms) to give me the opportunity to start meeting more people in the state.”

Connections turned out to be the key.

“Between that experience, a Stay to Stay event in St. Johnsbury, and making connections through other contacts in the state, I was able to get some real job leads. One of the people I met on that trip sent me the posting for the position I have now! Once I had an offer, my husband was able to narrow down his geographic area and find a position in Randolph, in IT,” she said.

Before they arrived, they stayed with some Vermonters they met through their college alumni association while they interviewed for jobs and looked for housing.

“We quickly found resources in Randolph, such as the Kimball Library and Chandler Center for the Arts and local businesses such as Movement Evolved gym and One Main Tap and Grill. Our first weekend in Vermont we went to One Main to watch the football game and quickly hit it off with one of the bartenders, a fellow Philadelphia sports fan! We both work in Randolph and our coworkers were instrumental in providing community, especially when life shut down just a few months later in March for the pandemic.”

Reflecting on the differences between Vermont life and life back in Baltimore, Lewis emphasized the Green Mountain State’s smaller scale.

“Baltimore is obviously a very urban place whereas there isn’t a single stoplight in Orange County! We have to plan errands more here; a trip up to Montpelier isn’t bad, but it’s an hour to Burlington if we need to get to some larger stores,” Lewis said, but added she can actually access daily necessities faster in Randolph than in the city.

Wide open landscapes are a draw, too.

“We used to live in a row house where we could hear our neighbors through the walls and now we have access to 30 acres of adjacent open land,” Lewis said.

“One of the biggest differences in our lives is that my husband, Todd, went from commuting four-plus hours a day between Baltimore and DC to a two-minute commute less than a mile away.”

The Lewises are excited to welcome their first child this May, and say so far, their experience with Vermont’s midwives and health care system has been “wonderful and very personal.”

“I would definitely recommend” life in Vermont, “particularly for anyone with a passion for the outdoors. Nature is a part of everyday life,” Lewis said, and small-town life means it’s easy to feel the interconnectedness on which Vermonters pride themselves.