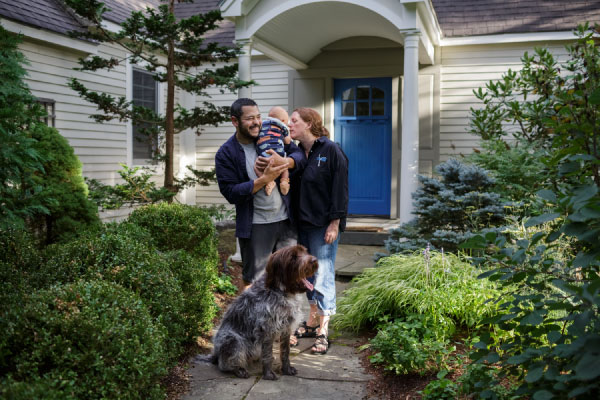 When New York City shut down in mid-March, Eliza Fitzhugh and Andrés Gutierrez already had a lot on their minds. The couple was expecting their first child, due on April 9th, along with a packed household of ten guests, from Eliza’s Vermont family to Andrés’s parents from Bogotá, Colombia. Flights were booked and the couple had reserved space in the apartments above their Brooklyn brownstone to accommodate the extended family.

By mid-March, everything began to change. Both Eliza and Andrés were still working, but now from home. The neighborhood parents’ group was buzzing with dozens of daily emails as soon-to-be parents across Brooklyn assessed the risk of delivering their children in New York hospitals, which were already overflowing with cases of COVID-19. “We had been going back and forth, back and forth,” said Eliza, about the possibility of going to Vermont to have their child, “and we had decided no.”

But on March 22nd, she received an email in the parents’ group that informed her partners would no longer be allowed in the hospital during a birth. This was a heavy blow. “It’s his kid, too. He should see the beginning of his kid’s life,” said Eliza of the possibility that Andrés would miss the birth. “In this moment, I lost it and said, ‘OK, let’s see about Vermont.’”

Growing up between the small urban center of Montpelier and rural Northfield, Eliza said hers was the kind of Vermont childhood where you just “know everybody.” Her father, who ran his own business, also hayed the fields and tapped maple trees in the surrounding fields and woods at his Northfield home.

“Everyone is really busy in New York, working insane hours,” said Eliza. “I really like the idea of community, knowing people around, and really getting involved in the lives of the people around you.” For the last two years, the couple had begun to look for a potential home in Vermont. “We wanted to give [our son] a safe place to grow up, a sanctuary,” said Andrés. But prior to the pandemic, this had still felt distant from their current Brooklyn life, still a year or two away.

A disastrous month of altering plans, searching for new doctors, and assessing risks altered this timeline completely. “The stress level in New York was insane,” said Andres, of the start of the pandemic in New York City. “I felt like I was crying every couple of days,” Eliza added. The knowledge that they couldn’t be together during the birth was the deciding factor. By early April, they had moved into Eliza’s father’s home in Northfield, breathing a sigh of relief for the space and safety it afforded. In New York, even taking their dog, Limón, for a walk had begun to feel like too high of a risk.

Still, future plans were murky. Maybe they would shelter in Vermont a few months before returning to the city, they thought. Yet the news of New York did not improve. By May, Eliza and Andrés ended their lease in Brooklyn and officially moved everything to the garage in Northfield.

They began the search for a Vermont home, which proved difficult. “We looked at every single property in the market,” said Eliza. Little was available. They considered buying Eliza’s father’s Northfield home, but the isolation of the rural location and the lack of immediate neighbors didn’t feel like the community that they had hoped for. When a home appeared in a cozy suburban corner of South Burlington, a few minutes away from Lake Cham-plain on the Burlington bike path, they were thrilled. With its excellent school system, diversity, and urban proximity, South Burlington felt right.

Other plans have shifted as Eliza and Andrés adapt to their new surroundings in South Burlington. Andrés’s architectural firm in New York, though it kept its employees working as long as possible, no longer has enough work. Andrés will begin the job hunt for work in Vermont and feels apprehensive about the availability of opportunities. Eliza, who had planned a 6-month maternity leave, is back at work as a creative director after only four months away. She wonders whether, once offices resume work in person, she may have to face a return to the city for her job.

For now, the proximity to safe spaces, nature, bike paths, and extended family has provided sanctuary for the couple’s transition to new parents. Although raised in the urban landscape of Bogotá, Andrés says that even be-fore he met Eliza, “it’s always been a dream to live in a place like Vermont. It’s a dream come true.”

“It’s always been a dream to live in a place like Vermont.”- Andrés