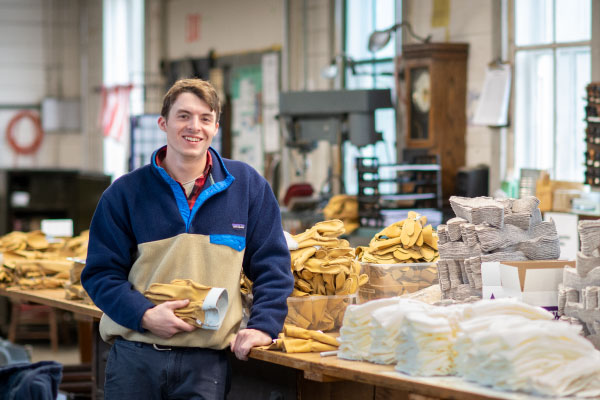 As a young entrepreneur, Sam Hooper carefully considers every decision he makes for his business, and every dollar he spends. So when Hooper, who bought the hundred-year-old Vermont Glove last year, was faced with replacing the building’s ancient heating system, he did his homework.

“We burned coal the first year,” said Hooper, “and it was really bothersome. Not only was I aware of our carbon footprint, but the building was dirty and inefficient. We had to keep the boiler running high just to keep the pipes from freezing.”

Hooper began to explore options. Weatherizing the building, which was built in 1920, was an obvious first step, but replacing the boiler would require a significant upfront investment for the young owner. “My advisory board members kept asking if the business could afford a new boiler,” said Hooper, “and how a new heating system would sell more gloves.”

But every time Hooper emptied the ash bucket sending coal dust wafting through the building, his resolve to make a change intensified. “It started with values,” said Hooper, “but I had to make the money work. It had to be a sound business decision.”

Working with Efficiency Vermont and Dave Frank of Sunwood Biomass, Hooper narrowed his sights on the Austrian made ÖkoFEN wood pellet boiler, which boasts 90 percent efficiency, versus the 55 percent efficiency rating of his existing coal system. Frank helped Hooper identify and apply for grants available from the USDA Rural Energy for America Program (REAP) and Renewable Energy Resource Center totaling more than $25,000, and estimated that switching from coal to wood pellets would save approximately $10,000 in annual heating expenses. With the grant and anticipated savings, the team projected a complete return on investment in six years.

So, Hooper installed the ÖkoFEN and put up a 23 ton silo to hold the pellets, which are delivered by the truckload and vacuum-pulled into the basement as needed. He also added insulation to the building, reducing air leakage by sixty percent.

“The efficiency gains from the insulation threw our projections off,” said Hooper. “We thought we would need 30 tons of pellets annually, but we only used about 13.” Instead of a six-year return on investment, Hooper now projects the new system will pay for itself within four years.

What’s more, the building feels clean and comfortable, even on the coldest days of winter. “We want to grow in Randolph,” said Hooper. “I want to create meaningful, rural jobs in this old, historic building. The new heating system makes Vermont Glove a better place to work, so we can focus our time and energy on making gloves.”

Hooper’s story is a great example of the “sweet spot” for automated wood heat systems. Emma Hanson, Vermont’s Wood Energy Coordinator, sees new construction and replacement of boilers that have reached the end of their useful life as opportunities for wood heat.

“Not only will the individual home or business owner realize savings,” said Hanson, “but collectively the move to automated wood heat supports our local economy. Wood is Vermont’s most readily available source of renewable energy.”

Hanson would like to see larger facilities, such as state buildings and colleges, move to automated wood heat, noting that projects of that size will help the state reach its goal of 35 percent thermal energy from wood by 2030. According to the Vermont Wood Fuel Supply Study, Vermont currently uses wood for 21 percent of total thermal energy. An increase to 35 percent would displace an estimated 40 million gallons of fossil fuel and save Vermonters $120 million annually.

What’s more, the report states that Vermont’s forests have ample capacity to meet that increased demand. “We can do it all right here,” said Hanson, who adds that a healthy market for low-grade wood is essential to the long term health of Vermont’s forests.

This story by the Vermont Sustainable Jobs Fund originally appeared at https://www.vsjf.org/2020/02/17/for-vermont-entrepreneur-wood-heat-fits-like-a-glove/. Photos by Erica Houskeeper. Written by Christine McGowan.