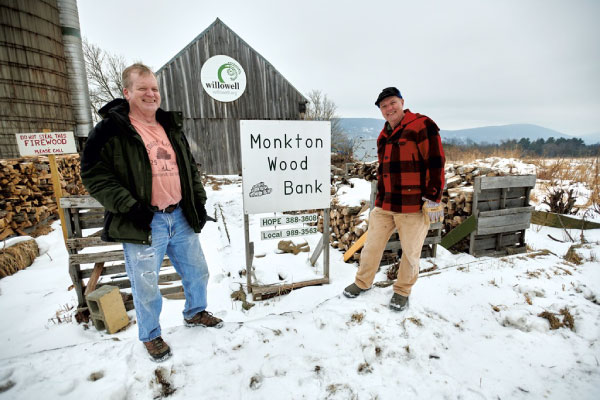 On a windy stretch of Bristol Road in Monkton, Lee Kauppila was ready to tell a story. Clad in a red checkered jacket, toque and work gloves, he was all booming voice and broad gestures. Kauppila is a cofounder and organizer of the Monkton Wood Bank, one of several in the area. A wood bank is a stash of chopped logs that volunteers like Kauppila deliver — for free — to people in need of emergency heat throughout the winter.

Kauppila seemed unfazed by the frigid temperature on the afternoon when a reporter visited. “See that mountain right there?” he asked, gesturing to the south. “That’s Little Hogback. On the other side of it is the Little Hogback Community Forest, of which I am a part owner.”

Created 11 years ago by the Vermont Family Forests project, the 115-acre forest is owned and managed by 16 locals. Half of those ownership slots were earmarked for people of modest income.

Kauppila and fellow forest co-owner John McNerney started harvesting their own firewood from the land right away. They cut a few extra cords every winter, calling it their “charity wood,” and donated it to anyone who needed it.

But Kauppila quickly decided they needed a more formal donation system. “Now, the problem is that none of us are really in the social services,” he said. “So we had a hard time finding recipients, although we did manage to always give away our wood.”

Kauppila went looking for other people seeking to donate wood and found a wood bank in Ripton. There, organizers had joined forces with Helping Overcome Poverty’s Effects, a Middlebury-based organization that operates a food shelf and provides assistance to homeless people and job seekers. HOPE identifies people in need of emergency wood or other fuel, and Ripton volunteers take care of the rest.

According to organizer Millard Cox, Ripton’s wood bank was launched following the economic collapse of 2008, when locals became worried about the rising cost of fuel. They raised enough money to build a shed beside the town firehouse and started seeking wood donations.

“It was a big success right from the beginning,” Cox said. “At first we were picking up slab wood from some mills that are close by, and then people just started dropping off logs for us.”

Highway crews sometimes dropped off wood that had been felled to clear space for roadways.

That same year, Lincoln residents also started a wood bank, according to former organizer Sally Taylor. “It was my concern, because of the economic downturn, that people would either have to eat or heat,” she said.

Today, Kauppila said, HOPE calls him as a last resort. Other forms of heating assistance are available to Vermonters, but the Monkton Wood Bank can fill the gaps in emergencies.

“If all else fails, we get the call from HOPE. That means the family doesn’t have any money. The last stick of wood might have just gone in. We get called pretty much last minute,” he said. “There may be a blizzard on the way. It might be below zero.

“We’ve made some deliveries where the check is on the way, the fuel assistance check,” Kauppila added, “but [it’s] not going to arrive for two weeks, and there’s no wood.”

The Monkton organizers keep wood on two sites: at a Bristol Road property owned by the nonprofit Willowell Foundation and at the Little Hogback Community Forest. They fundraise on Facebook and reserve some money to buy alternative fuels, such as wood pellets or propane, for Vermonters who can’t burn cordwood.

McNerney said the bank delivers an average of five cords of wood per season, but about nine cords in their busiest year. (For the uninitiated, a cord of wood is typically a 4-by-4-by-8-foot pile of tightly stacked wood weighing up to 5,000 pounds. A standard pickup holds about half a cord.)

Kauppila said he doesn’t ask questions about people’s circumstances or why they need help. He’s just happy to give it.

Cox likewise feels it’s important to deliver assistance to Vermonters in need without making them feel guilty. “We try to do it in a way that makes them feel good about it, as opposed to like they’re needy,” he said. “We try to make it as positive as we can.”

According to a report released in 2016 by the Vermont Department of Public Service, heating buildings accounts for 28 percent of Vermont’s total energy consumption. One of the goals of the department’s Clean Energy Development Fund, as well as of organizations such as Efficiency Vermont, is to encourage Vermonters to heat their homes with wood. The Clean Energy Development Fund offers a program that gives residents incentives to change out older, inefficient stoves for new wood and pellet stoves.

In fact, Vermont’s energy plan calls for an increase in burning wood to meet the state’s thermal energy needs. The strategy has its critics, and there’s plenty of debate about the best way to manage the state’s forests, as Seven Days reported last October. Environmental organizations, including the Sierra Club and the Northeast Wilderness Trust, have advocated for protecting more forests from logging operations.

Right now, according to Efficiency Vermont, 43 percent of Vermont homes use woodstoves for at least a portion of their heating, and a small number use wood as their primary source. Cordwood is nearly always the least expensive heating method available.

Wood bank organizers in both Monkton and Ripton stressed that their operations rely on volunteer support — including that of local church congregations, students and Girl Scout troops.

In Monkton, Kauppila described himself and McNerney as “firewood enthusiasts.”

“It’s our little passion to cut firewood, and that’s what we do. We cut all our own, and we do this, too. It’s great fun. It’s cheaper than a health club, really,” Kauppila said, gesturing at stacks of wood on the Bristol Road property. “We cut all that. We split all that. For old-timers, that’s not too bad.”