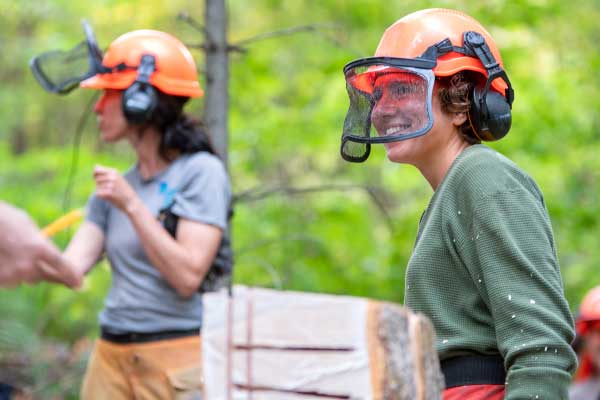 “Learning to use a chainsaw was the most empowering thing I have ever done,” said Caitlin Gosciminski, a natural resources major at the University of Vermont.

Gosciminski was among ten women who participated in the Women’s Game of Logging training at Merck Forest this fall. The sold-out training, which provides chainsaw safety and productivity techniques, hints at a shift in a traditionally male-dominated skillset as female professionals and landowners look to gain knowledge and confidence in felling trees and managing woodlots.

Nationwide, women are a large and growing part of the landowner population. According to a 2018 report from Yale’s Sustaining Family Forests Initiative, the percentage of family forest ownerships where a woman is the primary decision maker more than doubled from 2006 to 2013. Here in Vermont, women are the primary owners of 475,000 acres of forest, and the secondary owners of another 1.1 million acres, collectively responsible for 38% of Vermont’s total forest land. Coupled with the fact that women statistically outlive men, women are increasingly making important decisions about the management, sale, and division of forested land.

“Whether by choice or by circumstance, we are seeing more women landowners here in Vermont,” said Kathleen Wanner, executive director of Vermont Woodlands. “The long term health of Vermont’s forests relies on private landowners making sound decisions about their land, so it’s important that we engage these women and provide them with the resources they need.”

Caitlin Cusack, a forester with the Vermont Land Trust, adds that women who have not historically been involved with forest management often feel unprepared to take on that role. “In some instances, women just don’t feel welcome or are intimidated because they lack forestry vocabulary,” she said, citing research from the Sustaining Family Forests Initiative showing that ‘lack of knowledge’ is the main barrier to women owning forestland, and that women are less likely to attend traditional programming because they feel it’s not geared to them.

Recognizing that women bring a unique set of experiences, values and motivations to land ownership, Vermont Woodlands, along with the Vermont Land Trust, UVM Extension, the Women’s Agriculture Network, Vermont Coverts, the Department of Fish & Wildlife, and the Department of Forests, Parks, and Recreation founded the Vermont chapter of Women Owning Woodlands. With the network still in its fledgling years, the group is focusing on learning what skills and information female landowners are looking for, and what kind of programming will be the most effective in reaching them.

A phone call to Merck Forest education director, Christine Hubbard, this summer offered one answer to that question. “I got a call asking if we held women-only Game of Logging trainings,” said Hubbard. “People just assume it’s going to be all guys, which can be intimidating to women, some of whom have never even held a chainsaw.” Although they did not have such an event in the schedule, Hubbard decided to add one and promote it through Women Owning Woodlands. Within a few weeks, the event was sold out with a waiting list.

“There is clearly demand,” said Hubbard, citing a freer, less intimidating space for learning as the main reason participants signed up for the women-only event.

Caitlin Gosciminsk, the UVM student, commented that the class allowed her to feel comfortable speaking up and trying new techniques.

“Not only was this the first time I felled a tree using a bore cut,” she said, “but I got to cut down a 100-foot tall ash! It amazed me how I could fell a tree in such a precise location. It was a great day spent sawing with incredible, strong women.”

Gasciminski’s comment about being in the company of women picks up on a theme reiterated by Wanner. “Women have traditionally come together around food and family,” said Wanner. “They tend to want to learn in a supportive, group environment where they can build confidence. They want to know there are other women dealing with the same issues, and then discuss what they’re learning over coffee and cake.”

Women Owning Woodlands expects to complete its research identifying where there are gaps in services this summer. In the meantime, Wanner encourages anyone who is interested in the network to email info@vtwownet.org or visit the national website at www.womenowningwoodlands.net.

This story by the Vermont Sustainable Jobs Fund originally appeared at https://www.vsjf.org/2020/01/20/lumberjills-gain-logging-skills/. Photos by Erica Houskeeper. Written by Christine McGowan.