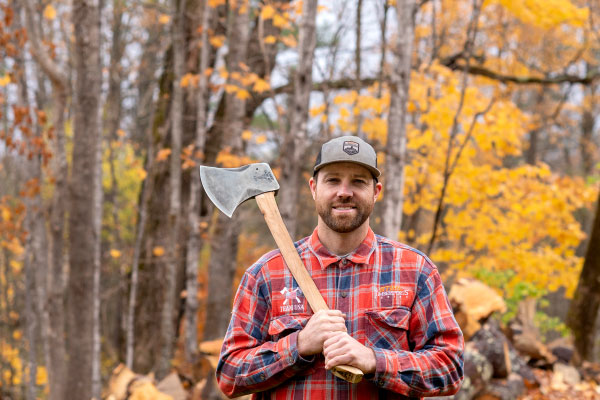 When most people think about world-class athletes from Vermont, they think of Olympic skiers and snowboarders like Kelly Clark, Hannah Kearney and Sophie Caldwell. And while it’s true that Vermont is a breeding ground for snow legends, it’s also home to one of the world’s most highly ranked competitive lumberjacks, Calvin Willard.

If you’re not among the 20 million people who follow the timbersports lumberjack competitions on ESPN, (which by the way, is the second longest running show on ESPN, just behind SportsCenter), then you might mistake Calvin for the unassuming logger, consulting forester, maple producer, and family man that he is. Watch him wield one of his $2,000 cross-cut saws or a custom-built $5,000 chainsaw that runs on a dirt bike motor, however, and you’ll also see a formidable competitor in one of the world’s oldest extreme sports.

Like many great competitions, the timbersports began with a bet. Back in 1870, two of the strongest loggers in Tasmania, Australia placed a wager on who could cut a tree down the fastest. The winner walked away with bragging rights as the better axeman. Twenty years later in 1891, the competition was formalized with the first ever World Championship Woodchop in Tasmania, but it wasn’t until the 1920s that the sport caught on in the U.S., when logging camps from Maine would send their best guy to a logging camp in Vermont to compete.

Today’s lumberjack athletes typically compete in six disciplines: the underhand chop, standing block chop, stock saw, single buck, springboard chop, and the hot saw. Athletes compete in all six disciplines to determine the single best overall lumberjack in the world. This year, Calvin placed high enough in five regional qualifiers to travel to Milwaukee for the STIHL TIMBERSPORTS® U.S. Championship, the most prestigious competition in the U.S., where he placed 7th overall.

“At that level, it’s very competitive,” said Willard, who likens the sport to golf. “Everyone there has the talent and the skill to win, so it really comes down to having a good day on the course.” He notes that, like most sports, youth and strength are important, but in timbersports, good technique trumps pure brawn. “You would think the biggest guy would win,” he said, “but that’s not always the case. Accuracy, timing and precision are more important than pure strength.” For that reason, the competition often sees people in their fifties and sixties competing right alongside the younger generation.

Willard trains hard in the off-season, working on his speed and accuracy by chopping wood in his yard, and shores up sponsorships to offset the cost of travel and equipment, which can run upwards of $25,000. His sponsors this year are Vermont-based Darn Tough Socks, Butternut Mountain Farms, and Vermont Mold and Tool, which builds racing axes for competitive use.

Despite the sophisticated equipment and televised competitions, however, Willard is quick to relate the sport back to the roots of his profession, noting that every discipline is meant to demonstrate how lumberjacks worked in the woods a century ago. “With the exception of the chainsaws,” he said, “we are using modernized versions of the equipment that would have been used 100 years ago.” The springboard chop, for example, where the axeman cuts a notch into a tree and moves progressively higher by wedging boards into each notch to stand on, mimics the way loggers, especially out west, would get above the “butt swell” in order to cut down larger trees. “The sport allows those of us working in forestry and logging to show how the job was done before modern day tree harvesting equipment was invented,” said Willard, who calls himself an old school logger and often uses traditional methods for tree harvesting. “It brings history right into the present day.”

With the STIHL TIMBERSPORTS® Championships behind him, Willard spent the fall traveling to regional competitions in Fryeburg, Maine and Merrimack, New Hampshire, and may go to Tasmania for the 150th Anniversary World Championship Woodchopping Contest in December. Through the sport, Willard and his family have traveled all over the world, meeting other families and competitors from around the US, Canada and Europe. If he does go to Tasmania, Willard will stay with a family of woodchoppers, and compete every day for two weeks among the world’s most accomplished axemen. “They start training at six years old in Tasmania,” said Willard, who also allows his five-, seven- and nine-year-old kids to chop wood with him. “It’s home to the best in the world, in part because the sport is oldest there.”

That may be true, but Vermont’s hundred year history with the sport isn’t too far behind. Logging as a profession and a way of life is deeply embedded in Vermont’s history and a vibrant part of today’s working landscape. Willard, who was introduced to the sport while at Flathead Valley Community College in Montana, sees the timbersports as a way to connect back to that history, and have some good, competitive fun at the same time. 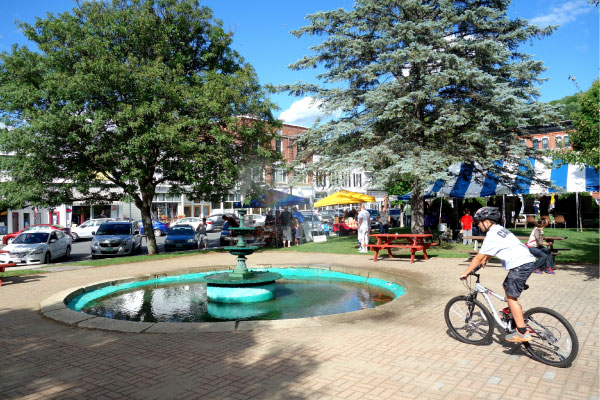