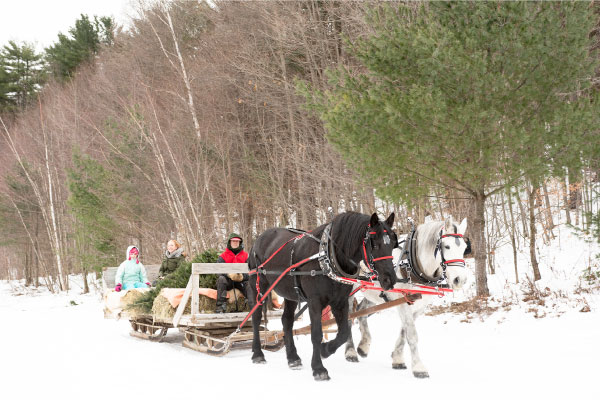 Most of us think about a Christmas tree for a few weeks in December, but David Russell, owner of Russell Christmas Tree Farm in Starksboro, Vermont thinks about them just about every day of the year. In fact, right now, he’s starting to think about the tree that might end up in your living room in 2025.

Open Thanksgiving through Christmas, Russell Farm sells between 1,000 and 1,500 Christmas trees every year, all of them grown on his 360-acre farm. David and his wife, Janet, retired from dairy farming in 2012 and made the transition to growing and selling Christmas trees, which now accounts for approximately 75% of their business. “It was an easy transition for us,” said David. “We were tired of dairy farming and had been selling Christmas trees on the side since 1980, so we already had the business in place.”

Last year, Americans purchased 27.4 million real Christmas trees according to the National Christmas Tree Association, with just under one-third coming from choose-and-cut farms. David and his seasonal team of 20 employees work hard to make sure the experience at Russell Christmas Tree Farm is a memorable one. Visitors are greeted by Eli and Emmett, the farm’s horse team, for a sleigh ride and treated to hot chocolate by a warm fire. Once visitors have chosen and cut down their tree, Eli and Emmett bring them back down the hill while their tree is tied and transported back to their car. “We take the hassle out of the process,” said Russell, “so that families can enjoy their time here.”

Seasons on a Christmas Tree Farm

While the holidays are certainly high season at Russell Farm, David’s work is year round. After a well-deserved rest after Christmas (for both him and his horse teams), David will turn his full attention to the spring planting. He has already purchased Balsam and Fraser fir seedlings from Asack Tree Farm in Barton, Vermont and from a state run nursery in New Hampshire, which will go into the ground after the ground thaws. During the spring and early summer, the trees are fertilized and rows are mowed to keep weeds down, all in preparation for the first shearing, which predictably takes place right around July 10 every year.

“The buds burst late May or early June sending out tender new growth,” said Russell. “Once that growth has come in, we begin shaping the tree.” He warns, however, that his trees are sheared to their most beautiful natural shape and size. “If you want a perfectly manicured tree, you can buy a plastic one. Mine are guaranteed not perfect and that’s exactly how we want them.”

Late fall, David begins to ramp up and prepare for the holiday season ahead, and so do the horses. After a lazy summer grazing, David begins in earnest to work his teams, which include Eli and Emmett, and a brother and sister team, Carina and Jackson. “It amazes me how excited they are to bring each group up the hill, but they have to be in great condition for the work,” said Russell. “Or maybe,” he muses, “they are just excited that this could be the last trip of the day before supper.”

In their spare time, the Russells manage the 300-plus acres that are not dedicated to Christmas trees, harvesting 10-12 cords of firewood he’ll need for the winter and selling small amounts of pine and ash. They also raise grass-fed animals.

The Choose and Cut Tradition

It takes between seven and ten years for both Fraser and Balsam firs to grow to the most popular six- or seven-foot height, which is why David is currently thinking about your 2025 Christmas tree. For the next decade, he will be shearing, shaping and tending to trees that might be sold to the children of his current customers. “We have fourth generation families buying trees from us,” said Russell. “I just received a card from a woman who has been buying trees from us for 35 years.”

Most of the trees on Russell Farm are harvested around six to seven feet tall, but he can always find bigger trees for customers who want them. “The biggest tree we’ve sold was to Shelburne Museum, and that one was about 25-feet,” said David. If a customer is looking for a very specific height in the 15- to 20-foot range, sometimes David will cut down a 30-foot tree and just sell the top.

Erica Houskeeper, of Burlington, started going to Russell Tree Farm with her family two years ago. Her husband, Dave Barron, and their daughter Phoebe, returned to the farm once again last week to cut their own Christmas tree. “We were a little late in getting our tree this year, and my husband and I wondered if we should just buy one somewhere closer to home that’s already been cut,” she said. “When we suggested that option to our daughter, she begged us to go to Russell Farm. ‘It’s a tradition!’ she told us. So, we took a trip to Starksboro and found a beautiful 8-foot tree. It’s always such a magical experience at the farm.”

“Music to my ears,” said Russell. “We want everyone to leave happy. The sincere appreciation people express is the reason I do this. It fuels my fire and keeps me going on those long days.”

This story by the Vermont Sustainable Jobs Fund originally appeared at https://www.vsjf.org/2018/12/18/a-year-in-the-life-of-a-christmas-tree-at-russell-farm/. Photos by Erica Houskeeper. Written by Christine McGowan.